It’s no secret that I’ve been salivating over some features in the newer Tesla cars since they came out. At the top of my list are All Wheel Drive (I live in New England…), Autopilot (I’m a geek and love the technology and also drive a lot) and some smaller things like automatic high beams (I live in a relatively unpopulated area where I get to use high beams a lot).

Tesla has increasingly been pushing for me to upgrade my Model S (only 2.5 years old at this point) to a newer Model S with the new functionality with emails like the one below:

This bothers me for a couple reasons:

Let’s look at the economics of two scenarios from my point of view. These are specific to my car and my situation but I suspect other Model S owners will find similar reasons  that the suggestion doesn’t make sense.

If I were to get a new Model S I’d want one with at least as much range as my current Model S which makes the S90D the only choice. I do not need things I don’t have today like air suspension, upgraded sound or more speed. But I do want the things I missed like all-wheel drive and autopilot.

Configuring a new Model S along these lines ends up with a car that costs about $110,000: 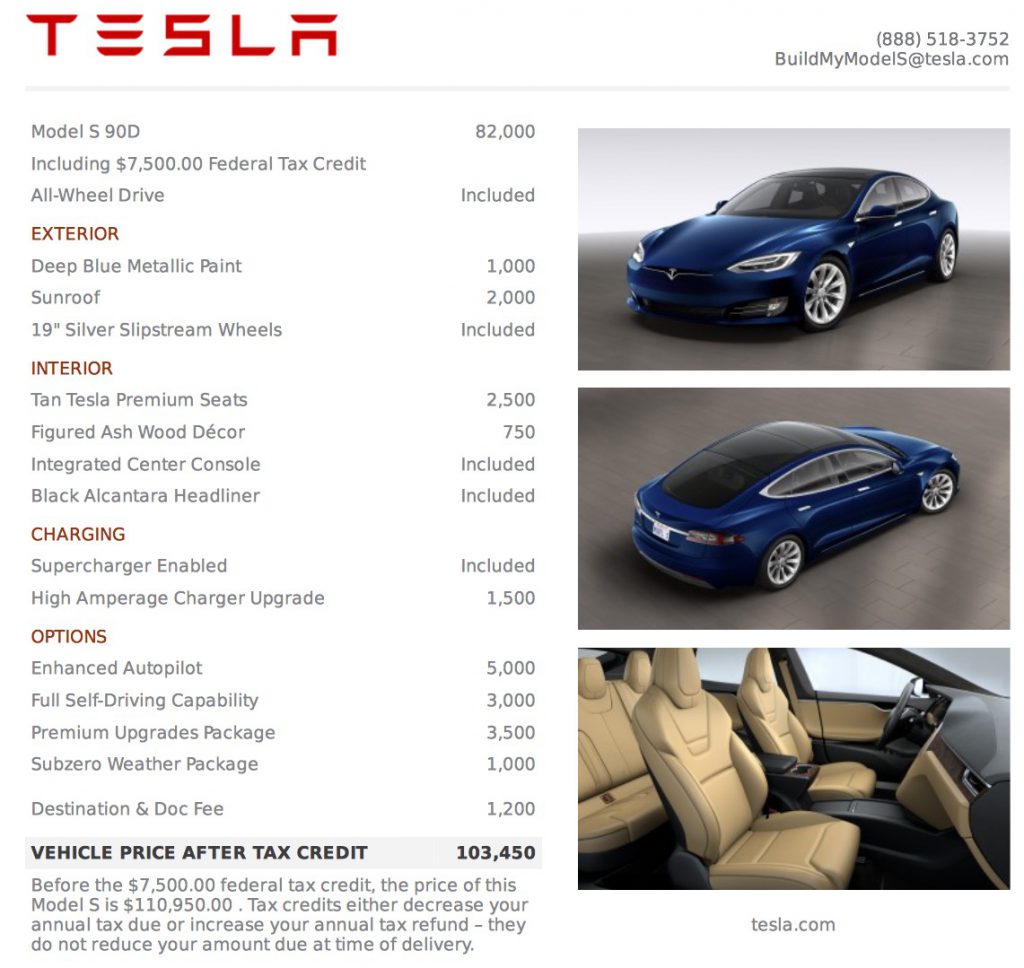 The “Full Self-Driving Capability” is probably one of the most questionable choices here and could be skipped to add later. My main concern on this (which seems to be unanswered) is if you get all the hardware upfront and it’s just a software upgrade or if hardware needs to be added or would be missing. I would want all the possible hardware upfront. I would go through the same thought process if it was a Model 3 or Model S though.

My current Model S at 70,000 miles and 2.5 years old (but otherwise in perfect shape) is valued at around $49,000 by Tesla for a trade in. It could be a bit less now since the trade in quote is several months old.

So, to upgrade now it would cost me about $60,000 out of pocket or financing to upgrade my car to the latest model.

This excludes the benefits of tax incentives which may or may not be available for Scenario 2 below.

While the pricing and options for Model 3 remain undisclosed, everything written about the Model 3 implies it will have all the same available capabilities as the Model S but many of them will be available as add-on options.

The Model 3 appears to be 90% of the size of the Model S. This is good as the Model S is too long and too wide anyway. The Model 3 still seats 5 comfortably, especially if they’re on the smaller side like my family. The Model 3 will have the features I want like all-wheel drive and autopilot and will even have other features available that I do not want like Ludicrous mode.

If the Model 3 indeed starts at the stated base price of $35,000 and we double that to a “reasonably equipped” version, we get an estimated price of $70,000.

So the net out of pocket/financed cost would be $30,000, or half the cost of upgrading now. That is a pretty wide gap!

Downsides to the Model 3 SCenario

The downsides to me seem to be very few:

Each time Tesla contacts me as they did above and tries to entice me to upgrade I ask them why it would make sense and outline the logic above. Each time they ignore my reply and probably move on to another potential “victim.” I think that Tesla should at least respond to their current customers and have an answer to a very reasonable question.

Are they proposing something that makes sense or not? Is there something I’m missing? Do they know something about the Model 3 that I don’t? If it’s a reasonable suggestion then tell me why and now so you can get a decision.

Tesla has a great product and promising business, but I think in this area they are missing the basics — a product and its price must make sense for the buyer. For existing Model S owners, a newer S versus a Model 3 may not make sense. Their recent price hikes in the Model S have not helped their position either.

Is there enough product differentiation between the Model S and the Model 3?

From where I sit right now, no, there isn’t.

Are you a Model S owner getting the same emails? Are you a new buyer thinking about the S versus waiting on the 3? I’d love to hear your thoughts on this in the comments below.

Tesla responded this time. I looked through my notes and found it was the same guy who ignored me the last time (which was on September 1, 2016). So at least they responded this time. They called out the uncertainty of the Model 3, the wait, and the lack of the Supercharging for life capabilities. Overall it wasn’t a strong answer.

It also makes the case for a newer S now even worse.

12 thoughts on “Is there enough product differentiation between the Model S and the Model 3?”