In my early days of researching Tesla and watching the rollout of the Model S I was concerned about a number of things that were popping up in the press. Fires, Drive Unit issues and handling in the snow were among my top concerns. Tesla addressed the fire issue quickly with a titanium shield and between their quick response and the fact it likely wasn’t a very big issue the problem no longer appears in the press.

Snow handling has been excellent for the Model S and many videos by Bjorn Nyland and others, some good Winter tires and the introduction of the all-wheel drive “D” models have put that concern to rest for most.

But the open question is has Tesla dealt with the Drive Unit issues?

There is a pretty large group of owners that have had one or more drive unit replacements. The most prominent ones are those that have been needed by major industry reviewers like Edmunds.com, but regular Model S owners like myself have also needed a drive replacement.

The early reports were of total failures of the drive unit leaving people stranded on the side of the road. Later reports moved towards a number of complaints around clunking or milling noises that lead to a proactive drive unit replacement by Tesla service.

If only a shim was needed and Tesla has been proactively adding them during service visits, why are they still replacing drive units?

There are a number of discussions and polls on TMC covering drive unit replacements:

While the numbers are small next to the total number of cars on the road, these are the equivalent of engine replacements on a fleet whose average milage is well less than 100K miles. Many owners report needing a drive unit replacement at very low mileage and without any harsh driving prior to the failure. The numbers are concerning, and the fact that a number of owners have had more than one replacement would indicate that Tesla had a hard time resolving this issue.

There are also indications that some simply postponed replacement that may be needed in the future:

Some of the surveys indicate that the problem existed through all of 2014 and Tesla really didn’t get things under control in new cars until late 2014:

Videos like this one from a more recent model (with autopilot hardware in it) indicate there may still be an issue out there for the newer cars too:

The number one thing Tesla did to address the major concern of the cost of such a replacement and long term ownership is to provide an unlimited mile/8 year warranty on the drive unit. While I took the leap of faith before they did that, I think this move was a great response to an ongoing concern about the long term quality of their drive units and eased a lot of potential buyer’s fears.

Elon is now talking about building a power train that will last a million miles and I believe Tesla continues to put significant energy into improving the drive units, however I think they’re still learning in this area.

Tesla continues to honor the warranty and is proactively replacing drive units that show early signs of problems.

Around the 30,000 mile mark after 12 months of ownership I started hearing a humming noise from the rear of my Model S as I cruised on highways. I had had my first annual service just a month prior and Tesla had applied all the service bulletins and gone over the car thoroughly so I wasn’t expecting any trouble.

The noise was unusual as I had gotten used to just the noise of the tires and wind and the addition of a noise that sort of sounded like an engine was a change. The noise started off pretty light and was only noticeable when cruising or decelerating with regeneration at 65 MPH and over. I drove with the noise increasing slightly over the next few months but did not contact Tesla. My rule of thumb on noise issues to make sure i’m not crazy is to wait for a passenger to comment on a noise.

If the Drive Unit is failing the noise will get noticeably worse over time.

Just over 2 months after the humming started a new noise started. This was a higher pitch milling type noise which was very noticeable when traveling at speeds of 20 MPH or less. The frequency/sound varied depending on how much power was being used and just the right amount could really made the sound come out. This noise was noticeable to the point that driving through a town, or pulling into a parking lot people turned and looked at the car and wondered what was wrong with it. This wasn’t exactly a great showcase for the quiet EV life or the expensive Model S. 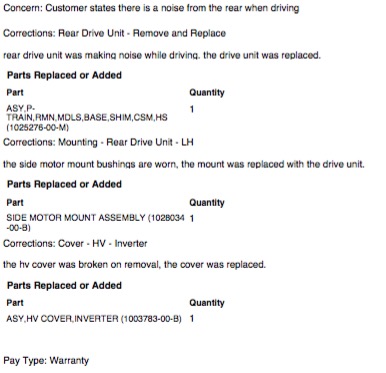 Tesla service had me come in for a test drive which they can do on demand without long waits. We’d gone about a block before the service technician said the drive unit needed to be replaced.

Tesla service has been very backed up in Massachusetts for a long time so I got scheduled for the replacement 6 weeks out. During that time I put another 4,000 miles on the noisy drive unit before it was finally replaced.

When Tesla replaces a drive unit, they replace both the drive unit and the inverter as a set as you can see from the parts list. The last letter in the drive unit part number (“M” in my case) seems to indicate the generation of the drive unit. The later the letter the better, with the “Q”s seeming to have the best longevity according to the forums.

When I got my car back it was pulling oddly as I accelerated and decelerated so I had to turn back around and have them take things apart again and tighten/align things for another half day’s worth of service.

Since the replacement, things have been fine both with the way it drives and the noise level and I’ve logged 8,000 miles on the new drive unit under a variety of conditions. My replacement was done recently enough that i’ve probably got a new drive unit that is past the early experimental fixes they tried and I’m hoping it will be my only replacement.

I think there are still a large number of cars out there from the era of drive unit issues that could potentially experience the issues reported and lead to drive unit replacements, but new cars hitting the road seem to be mostly free of this problem.

Tesla has addressed the drive unit issues in new cars, but older cars without updated drive units may still continue to experience failures.

Thankfully for all of us, Tesla has a first class warranty on the drive unit. So while it may be inconvenient, you are covered for any future problems and Tesla, as usual, will make things right.