Reading some blogs this weekend I realized that while the weight/handling of the 60kWh version are supposedly the same as the 85kWh version I ordered as the sales guy stated, the performance will be different and the experience I had on the test drive wasn’t as good as what i’ll get with the one I ordered.

Going from 60kWh to 85kWh the horsepower jumps from 302 to 362. At 362hp it surpasses the highest horsepower i’ve owned before that in a 1981 Porsche 928 (330hp). The 0-60 time is also a bit better as you go from the smaller battery to the largest as it drops from 5.9s to 5.4s. The performance version takes it to a crazy 4.2s but I was only interested in the largest battery, not the best performance.

Either way both versions beat the 0-6 of 7.4s for that Porsche.

And those times above are the quoted times from Tesla. Evidently real world testing shows consistently better performance on all 3 models. With those tests they got 5.5s for the 60kWh version and 5.1s for the 85kWh one.

While I appreciate that not all test drives turn into sales and that they can’t necessarily have all models available for test drives I would definitely have preferred to have driven the 85kWh version and preferably not with the air suspension so I actually drove something similar to what I intended on purchasing. One of the downsides of buying in a mall or online I guess. Either way it will be a great car.

Since the reservation and confirmation on 3/7 the only pro-active communication I had from Tesla was a useless piece of snail-mail fluff from their VP of sales. I proactively reached out to their charger people to get advice on installation for the electrical side and decided to go with my own electrician. There’s been nothing about the process from here or how payment happens etc.

Other than the VIN assignment and a static “We have begun sourcing parts for your Model S.” message there have been no updates on the owners portal. You can download the Tesla app but when you login with it it says there are no cars associated with your account yet: 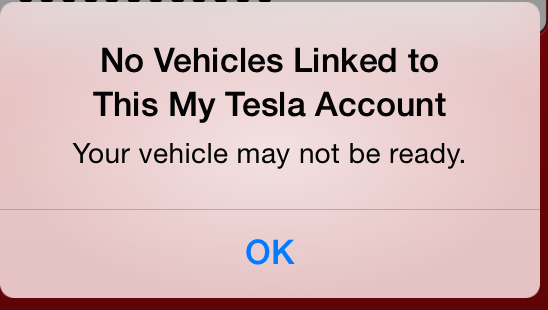 Bit nervous on the timing since i’m away for a couple weeks and any money transfers/financing take time and supposedly delivery is “Late April”. We shall see.